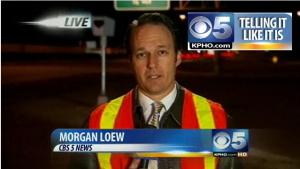 In KPHO’s Monday night report on whether speed cameras make the valley streets safer, the news channel repeated their tagline, “telling it like it is,” emphasizing facts over opinions, and hoping that would be enough to keep viewers from noticing that they were about to do the complete opposite.

In the video, for an unexplained reason, they cherry-picked data from a small portion of the I-10 corridor, as well as selectively choosing data from only two months: November and December 2006 and 2008. Anyone who’s taken a basic statistics class knows that a bigger sample size is needed to draw any meaningful conclusions for this program that has over 15 months of data and 40 fixed camera locations. Additionally, it is suspicious why data for 2007 and 2009 were ignored, as well as years prior to 2006. If this data was shown, it would probably reflect the national trend toward fewer accidents that has been ongoing for decades – without cameras. And finally, they neglected to compare results with comparable states that don’t use cameras, such as Nevada. As we’ve reported here before, states like Nevada have achieved similar safety improvements over recent years WITHOUT the use of cameras.

Then KPHO proceeds to make the sweeping statement that the difference between 2006 and 2008 is the speed cameras, and gives credit to nothing else. There was absolutely no mention of any other possible changes between the two years such as changes in laws, construction activities, road improvements, changes in traffic enforcement tactics or policies, changes in DPS staffing and patrol levels, reductions in unlicensed (undocumented) drivers, or any other factors that may have changed over 2 years. The only other factor they mentioned was traffic volume, but only presumably because Representative Biggs mentioned it in his interview. But KPHO blew this one as well. They implied that there should be a 1-to-1 relationship between traffic volume and the number of accidents. In other words, they implied that if there was an 11% reduction in traffic volume that it would correspond to an 11% reduction in crashes. But the problem is that the relationship is much more complicated, and an 11% reduction in traffic volume can yield much greater safety improvements due to lower traffic density. KPHO declined to inform viewers about this important little fact.

Finally, by riding around with a DPS patrolmen looking for an accident to investigate, KPHO tried to paint a picture that freeway accidents are a rarity now, but anyone who listens to the radio traffic reports during their commute knows that the accident list is just as long as it’s always been.

This is only the beginning.