From the woman who brought you the largest fixed freeway scamera system in the United States, we bring you The Underwear Bomber. However one may feel about the nature of this attempted attack, something Arizonans knew all along is now apparent to the rest of the country: Putting Nappy in charge is irresponsible at best and potentially dangerous. 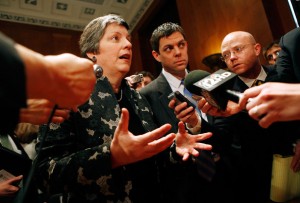 In Arizona, she put the measure to approve the contract with Redlfex and their freeway mounted automated ticketing machines in to an annual budget. There was little if any debate over it. The contract was never voted on by the public or a legislative body. As a result, Arizona motorists have been issued almost 600,000 photo radar tickets in less than a year. What she left behind when beckoned to D.C. to run The Department of Homeland Security (DHS) was a court system overwhelmed with civil traffic violations, a state budget in ruin, a more dangerous border and an angry public. I suppose we should be thankful that she was jettisoned out of our great state, but her new job doesn’t exactly hide her ineffectiveness.

Even The Huffington Post has seen enough. It posted a scathing article by a former U.N. Ambassador, calling her unqualified. A google search for calls to resign yields more than a few results. The queen of surveillance has proved once again, that capturing violations, felonies or even terrorists on video does not prevent them. Did Janet really ever care about safety? Arizonans know one thing about its former Attorney General, Governor and Scamera Queen, she’s great at pushing her own agenda and the public be damned.