Its time to make another great showing of solidarity and determination. Automated ticketing and overzealous surveillance will no longer be tolerated in the Grand Canyon State.

Also a good idea: Forward this event to a friend, call a co-worker with the news, or for you Twitter users why not consider posting an update to your account?

Members of the “Liberty Restoration Project” recently held a demonstration opposed to the use of automated ticketing machines in Kansas City, MO. They are supporting state Senate Bill 211 which would ban the practice outright.

In Maryland, members of CameraFRAUD DC held a small rally which drew the attention of NBC Washington. “Do you really think that these people came out today because they want to be able to drive too fast?” said one forum participant on the NBC Washington website.

“They came out because they did a little investigating and found out what a racket this is...”

In Arizona, CameraFRAUD plans to hold a rally on Friday afternoon in the Phoenix-suburb of Chandler. Past demonstrations in Arizona have drawn hundreds of participants and captured the attention of local media. 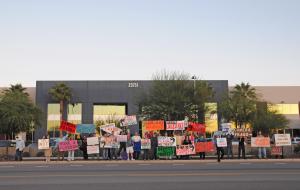 WHY: It’s fun, the weather is beautiful, and the drivers love us!

HOW: Just show up. Bring a sign or use one of ours!

RSVP here, or to be notified of future events.

Bring a sign (or use one of ours), or drive by and show your support!

News | Tagged: All They Want To Do Is Take Your Money, Demonstration, East valley, KTVK, Scottsdale, Sign Wave, The Cameras are Coming Down |