From January 2009 through June of 2010, approximately 1,700 volunteers of Arizona motorists and concerned citizens launched an effort called “Arizona Citizens Against Photo Radar” to push back on the unconstitutional and dangerous freeway photo radar system installed by Janet Napolitano after being approved in the budget proposal by Arizona Legislature.

Arizona Citizens Against Photo Radar or ACAPR collected north of 130,000 signatures using a measly sum of just over $4,000 in donations which mostly came from individuals in the group itself. These facts are indisputable and corroborated by the AZ Secretary of State Office, who even did an audit of the donations. Why? Because they didn’t realize how badly Arizona government screwed up by allowing for a network of Redflex spy cameras to be installed on AZ interstates and highways. The blowback was somehow unanticipated.

They just couldn’t believe that citizens could really put that much energy into fighting them with nothing in return other than the satisfaction of working hard to preserve their rights.

They were wrong. The effort was overwhelming, though it didn’t qualify for the state’s tough standards to be placed on the ballot automatically. Jan Brewer caved in and canceled the state’s contract with Redflex, but refused to put the citizens initiative on the 2010 vote, when she had the power to easily do it.

The cameras on the freeways indeed came down. Since that time, members of the CameraFRAUD group have been demanding legislature do their job and ban the rest of Redflex and American Traffic Solutions’ automated ticketing machines.

Yesterday, Representative Karen Fann [contact], chair of the Transportation Committee and Stan Barnes [contact], American Traffic Solutions lobbyist teamed up to make a mockery of the committee process. And while they were at it, they insulted the intelligence of their fellow Arizonans and then danced a little jig all over the shredded remains of our state constitution.

After hearing from just two members of this group, pro-camera lobbyists were paraded up one by one, each more delusional than the next, thanks to Fann’s appetite for statist grand-standing.

Then came Stan Barnes, the highest paid lobbyist in the state of Arizona who shills for ATS. He began by mocking the effort to get rid of his company’s cameras and then repeated lie after lie. Lies so ridiculous that audible laughing could be heard from the chamber.

Barnes: “A well funded, out of state group launched a citizens initiative against the cameras that failed to make the ballot”

Barnes calling $4,000 in just over 18 months “well funded” and ACAPR “out of state,” is an absolute joke and an insult to the hard work of this group which is still paying dividends for defenders of citizens’ rights.

Barnes designer jeans began to visibly shake as nervousness set in after that little liar’s rant.

However Barnes was just “doing his job,” as depressing as that is for hard working Arizonans. And his salary, in terms of our $4,000, makes him the equivalent of Goldman Sachs, Chase Bank, B of A or any other corporate welfare recipient/bailout baron in the state of Arizona. Barnes is well paid for his acting.

So well paid, in fact, that he has plenty of cash every cycle to donate the max amount to Rep Karen Fann’s campaign, records show. So Fann allowed for seemingly endless debate on a 1/3 of a page bill (HB 2579) “Photo Radar Prohibition” and throughout the proceedings, informed the other 5 members of the committee just how to kill it.

The most blatant act was visibly talking Rep Sonny Borrelli out of voting for HB 2579, after he said during debates that he would vote to send it to the House floor (yes vote).

Fann was counting votes and saw that hers would be the decider, so she leaned over to Borrelli (the committee vice-chair) and told him he had to switch to a NO. Borrelli caved to her demand voted no on HB 2579 then saying, in an effort to clear his conscience “My mother is retired LAPD and will kill me for this vote. She saw how rear end collisions went up with the cameras and hates them too.” Borrelli placed his no vote, giving Fann the cover she needed.

And they really expect the voters in their districts not to see through all this.

Every member of the committee who voted no, effectively told their districts that their job was NOT TO REPRESENT THEM, but to leave that up to someone else back home. They must be confused about why they go to the state capitol each session.

Fann clearly doesn’t understand her role as chair and allowed Stan Barnes, The Redflex contingency and her vice chair to turn the Arizona House of Representative Transportation Committee into a circus act, complete with the horse dung smell.

Arizonans aren’t buying it and this bill is likely to find its way to the House floor for a vote despite Fann and Barnes best efforts. 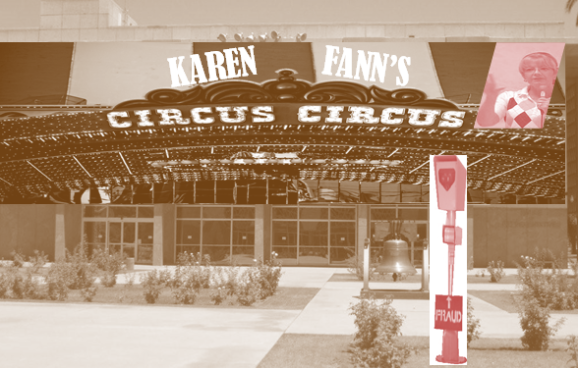