On Friday, the patriots of CameraFraud once again come together at one of the most notorious and sinister RedFlex intersections in the valley, University & Rural next to ASU.  Come out and show your support by demonstrating with us on the corner.  Lets remind all the ASU students and Tempe residents about the combo scameras (speed & redlight) at this dangerous intersection.

These “combo” cameras are much more dangerous than regular speed cameras because they get you whether you are stuck in the intersection (like during heavy traffic) or whether you speed up slightly to avoid being in the intersection on red.  (Tail I win.. Heads you lose..) Or you could resort to what many drivers do and slam on their breaks before approaching the sensors- and cause a rear-end collision…  Combo cameras are yet another deadly reason why the scameras need to be coming down in November…

Come out and show your support Friday afternoon; we’ll be starting around 5pm and going till at least 6pm.

slapped with huge fines for speeding to pay in installments. This move, which will undoubtedly cost more time and money for the city when all is said and done, will require cash strapped citizens to apply for a “loan” to cover the cost of a traffic fine. Of course, if they had not put so much stock in cashing in on a commuting public and charging such unreasonable fines, this might not be an issue.

A story on KTAR.com has some interesting comments coming from the city, DPS and attorneys:

“The city of Phoenix is in such bad shape right now, financially, that this is a complete revenue stream.”
Your best bet to avoid a speeding ticket is to stay within the speed limit, according to the state Department of Public Safety.
DPS’ Kevin Wood said there’s no such thing as a cushion for exceeding the speed limit.
“DPS officers have 100 percent discretion, and it’s totally up to them depending on the stop, the circumstances of it,” Wood said.
The officers aren’t impressed by the most-used excuse, “I was just going with the flow of traffic,” he added.
“If the flow of traffic is doing 15 mph over the posted speed limit, the odds are one of those people who’s doing that is going to get stopped.”
Wood added, “I suspect if you talk to 100 police officers, they will tell you speeding is speeding. Here with the DPS, the maximum speed limit is what it says.” – http://www.ktar.com/?nid=6&sid=1282013

This is interesting logic in light of Redflex’s standard of 10+ MPH over the limit being deemed as “speeding.” Maybe DPS and Redflex need to compare notes again because something isn’t adding up. 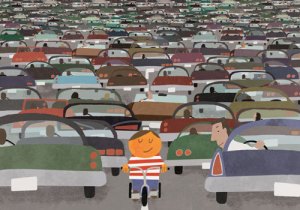 What’s also interesting is that these comments seem to suggest that DPS advocates obstructing traffic to avoid tickets and fines. As you may know by now, it is variance of speed that is most dangerous, not actually speeding itself.

Something else that DPS and Phoenix PD officers may like to review is that the law in the state of AZ calls for “reasonable and prudent speed,” so saying that the limit is the maximum is not actually true, but the “scientific poll” that must have been conducted by Officer Wood seems to suggest that it is.

The other part they left out is that photo radar tickets are often given out to motorists who were not even exceeding the limit, which causes massive government waste and strain on an already overwhelmed court system. Of course, there isn’t actually an officer present when the “violations” are captured, so it’s up to Redflex’s unchecked and frequently faulty equipment to act as an un-sworn officer of the law.