Results Are In: Every Camera Ban Initiative Wins

Never before have citizens groups across the country with no funding been able to slay the corporate funded, highly paid lobbyist-driven dragons. American Traffic Solutions(ATS) of Scottsdale, AZ headed by Jim Tuton spent more than $1.5 Million to try every trick in the book in the 5 cities that were voting on bans of his automated ticketing machines. He paid lawyers, lobbyists, front groups and shelled out big money to run ads in major news publications. The result? Jim and ATS lost in every city.

All 5 of the citizens groups, located in California, Washington, Ohio and Texas spent a total of $2,000 funding their grass roots efforts. What an amazing accomplishment this is for concerned citizens who registered free websites, wrote articles, utilized social media, studied data, scored media attention, gathered the necessary signatures and finally, stood at the polls all day on Tuesday earning votes.

These types of victories are unheard of and should be recognized as proof positive that citizens groups with virtually no money can actually prevail with hard work, and of course, being on the right side of a hot button issue.

Here is a list of the cities who will no longer suffer the constant surveillance and money drain of automated ticketing machines.

Notably, in Mukilteo and Anaheim, the citizens initiatives are winning by more than 70-30 ratios. Congrats goes out to all, but especially those two groups for their resounding victories.

Despite the widespread use of ATS cameras, Tuton and his team of lawyers and lobbyists do not have an unending supply of money. How many more of these defeats will they be able to endure? It must be mentioned that photo ticketing has never survived a public vote and Tuesday, November 2nd, 2010 was no different. It was definitely one for the record books and scored 5 victories out of 5 for the good guys. 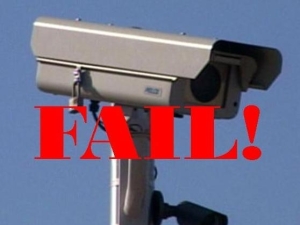