The City of Scott$dale, in coordination with the fraud experts at American Traffic Solutions, Inc., placed a photo enforcement vehicle disturbingly close to the establishment where CameraFRAUD.com held a public volunteer meeting. 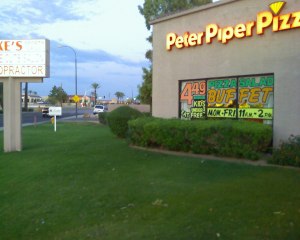 The meeting, held on the evening of September 12th, was located at a Peter Piper Pizza on East McDowell Road, and was publicized for over a week in advance on CameraFRAUD.com. A marked “Scottsdale Police” photo enforcement van was illegally parked on the shoulder of McDowell, between the restaurant and the embankment for Eldorado Park. 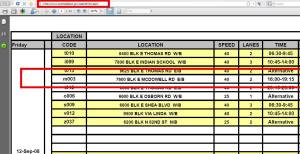 A quick look at the City of Scottsdale’s online scheldule of van locations shows that a new scheldule was generated on Friday, September 12th, and the van was set to be located at “7600 Blk E McDowell Rd E/B” between 4:00 PM and 7:15 PM. (Peter Piper Pizza is located at 7607 E McDowell Rd). The van was there until at least 8:00 PM.

With hundreds of places where the vans could be located (multiplied by the various times of operation), the chances of such placement being an “honest mistake” seems highly unlikely— but not impossible. The City of Scottsdale has a clear record of attempting to squelch dissent with the recent arrest of a freelance journalist / videographer for local site FreedomsPhoenix.com.

Now, one is lead to wonder if the city is actively attempting to intimidate businesses (and perhaps provoke) peaceful citizens who are guilty of no crime other than lawful assembly over a pizza pie.

The Cameras are Coming Down.