A CameraFRAUD member, who is a local Fireman, sent us the text of a letter he has sent to several Arizona state legislators.

This member also commented that he collected dozens of signatures to ban photo ticketing in Arizona from Police Officers who felt the same way he did, but are bound by rules for public employees not to speak out.

We’ve kept this info confidential in order to comply with unfair rules that city and state employees are bound by in public statements about their jobs.

For your research into voting on SB1352, “Photo Radar Prohibition”, I would like to provide you with my personal experiences as a firefighter of 25 years in how photo traffic enforcement has negatively effected the publics safety. Then, I would like to illustrate how the photo traffic enforcement industry and their supporters have consistently altered the raw data into their favor for financial gain.

I was assigned at an East Valley fire station in the 1990’s when one of the first red-light cameras were installed there. Within a few weeks, I realized that we were responding to those monitored intersections for vehicle accidents more than ever before. Initially, we were told that the increase in accidents was only temporary and then that the rear-end collisions were a trade-off for more severe accidents. Regardless, we heard often from drivers who blamed the cameras for their unfortunate actions. Months later, the entire crew laughed around the kitchen table when press releases erroneously stated that accidents were down and the cameras were working. Since that time, I have continued to see a higher rate of accidents where cameras are located no matter what my fire station assignment has been.

In 2001, it was found that violations had suddenly decreased 73% overnight at 5 of the 17 cameras of the city that I worked for. It turned out that a city worker had increased the yellow light timing at these intersections from slightly below the federal minimum to approximately one second above. The police department wasted no time in celebrating the reduction in the press, but the camera vendor took legal action against the city for breech of contract. The change was apparently costing them and the city $300,000 a month in potential revenue. Subsequently, the cameras at those five originally identified as “deadly intersections” were removed. At this point, I realized beyond any doubt that photo enforcement was all about money.

Over the years, I have followed this issue closely and have seen an unwavering trend in the reports given to the media. Simply put, studies that favor photo enforcement can be traced back to the camera companies, insurance industry, or others who gain to make money from the technology, as they are very skilled in how they work the statistics to their favor. The most recent national study from the Insurance Institute for Highway Safety (IIHS) is an example of this, as they deemed a suburb of Phoenix as the poster child for red-light cameras with a 79 percent decrease in fatal accidents. When one looks past the numbers, it is revealed that the study is scientifically flawed, fails to account for a multitude of roadway infrastructure upgrades that hold many driver safety benefits of their own, a continuous decline of the nationwide fatal accident rates, and so much more.

Reports that find neutral or negative findings with the camera technology are from organizations that have no financial stake in the matter. The Virginia Transportation Research Council and Texas Transportation Institute are two of the most respected organizations that each completed their own exhaustive studies finding that photo enforcement increased accidents and caused taxpayers more money in the long run. These reports both recommended that a more efficient route to safety would be in intersection re-engineering, more visible traffic lights, proper yellow light timing, and more.

As a politician, I am sure that you have seen when one statistic can be used to argue either side of the debate. However, when all of the details are revealed and the trickery is exposed, only one side is left standing. I urge you to look past all of the numbers that you are presented with for the unbiased truth.

In closing, all 15 of the past elections across the USA where voters got a chance to speak their mind on photo enforcement, they gave walking papers to the camera companies in all 15 elections. Ironically, just before most of those elections, commissioned polls by the camera companies themselves stated that photo enforcement was overwhelmingly favored. Now, add in the (failed by a slim margin) petition to put such a vote to Arizonians that resulted in just shy of 150000 signatures and approximately 70% of the drivers who refused to pay their citations from the 18 month freeway camera program, well, that should speak volumes to any elected servant of the people.

I hope that you will endorse this bill with your vote and put Arizona down as the 15th state of the Union that ban photo traffic enforcement. Thank you for your time in reading this letter and your public service in office.

The cameras are coming down. 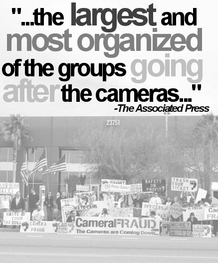