What do you do when your industry approaches market saturation and increased public opposition?

This is the question the peddlers of automated ticketing will have to start asking themselves in the immediate future if they hope to survive in any form whatsoever.

Almost all large United States cities have been approached by either Redflex or American Traffic Solutions pitching the tired, debunked claims of improved traffic safety.

Unfortunately for these companies, voters and drivers have awakened to the scheme and are opposing new and existing systems worldwide over a variety of reasons, from civil liberties concerns to the proper role of government.

Smaller and smaller communities are being being swindled into signing contracts with these corporations, resulting in millions of dollars being extracted from local economies and sent directly to the profiteering vendors.

The blowback to such installations has ranged from expected opposition to cold-blooded murder. Last week, the confessed shooter of a Redflex photo radar van driver in Arizona was sentenced to 22 years in prison.

Unclear is the liability the State of Arizona will face for their “romp in the bed” with corporatism in the form of photo enforcement. Redflex was contractually obligated to provide “public service announcements” to explain automated ticketing to the public when the statewide ticketing contract was signed with the Department of Public Safety.

DPS is now being sued by the surviving family, and rightfully so. It doesn’t take an overpaid government beancounter to figure out that placing an unarmed civilian in a vehicle falsely marked as law enforcement is a bad idea.

With an onslaught of bad publicity, automated ticketing vendors may remember 2010 as the year their business model went sour. Lawsuits demanding refunds plague Redflex in Minnesota to the tune of millions of dollars while increased legal challenges in Florida and California threaten the very existence of red light cameras and so-called speed enforcement.

The Cameras are Coming Down… but in the end it may be due to the fatally flawed business model based on greed and inconclusive results that ATS and Redflex have depended on for over a decade.

Hi, Vince here from Redflex! Get ready to "snapshot" your way out of wreckless, drunken government spending with our new ScamWow! It's so easy!

Lobbyists who visit local city councils for Redflex are compensated on a commission-based scheme, and in one instance the cash was promised to be split with the wife of a local judge:

Redflex Holdings allegedly agreed to pay 3.2 per cent of its share of camera revenue to the former United States councillor, who subsequently arranged to split the cash with the wife of a local judge.

Okay, camera apologi$t$: tell u$ again how it’$ not all about the money?

American Traffic Solutions or Above The Statutes, Inc?

The incident occurred early Saturday afternoon on westbound US-60 in Mesa, Arizona near exit 181. A CameraFRAUD volunteer witnessed and recorded the incident.

The white Chevrolet Uplander was observed exceeding the posted speed limit on the US-60 and failing to signal a right-hand turn onto north Stapley Dr.

CameraFRAUD has collected details about the “tali-van” scofflaw, and in a twist of roles, will issue a “Notice of Violation” to American Traffic Solutions on Monday.

Much like the millions of notices the Scottsdale-based company issues each year, the violator will be given the option of paying an arbitrary “fine” or attending a hearing.

An “Assessed Donation” in the amount of $5,000 made payable to the Children’s Cancer and Blood Foundation by American Traffic Solutions is requested by CameraFRAUD to cure the violation and the flagrant disregard for the law exhibited by the photo radar van driver. (Disclosure: We are not affiliated with CCBF, nor are they a sponsor or part of our request).

Automated ticketing vendors have a long history of breaking various statutes and flaunting the law when it suites their needs. In September of 2008, a Redflex van driver was arrested for DUI while driving from Scottsdale to Tempe to set up the vehicle.

In September of 2009, another Redflex driver was caught on tape in north Phoenix driving recklessly in the fully-marked faux-DPS Ford Escape.

In addition, numerous high-ranking executives of both ATS and Redflex have ignored their own tickets in a blatant example of do-as-we-say-not-as-we-do.

ATS has never been shy invoking “the children” as a reason for the usage of automated ticketing. Now that they’ve been caught (again), it’s time for them to put their money where their mouth is and make a donation to a worthy, independent cause.

We eagerly await a response from American Traffic Solutions and will keep you posted with what happens.

It’s hard to find a mainstream media piece as perfect as this one. Enjoy the video and post your comments below.

Good: The lovely Tracy Grimshaw of A Current Affair asks the question of automated ticketing: “Life savers or just revenue raising cash cows?” CameraFRAUD as well as FireRedflex.com are mentioned in the story.

Quotes from the video: “Governments all around the world are in a lot of debt, they have to raise more money, and what better place to raise money than from penalties and speeding fines.”

“The cars are unmarked and there’s no warning sign until after you’ve driven past, and even then it’s tiny.”

REPORTER: “What do you do to pass the time when you’re sitting in here?”

REDFLEX DRIVER: “We watch the instrument.”

REPORTER: “And you need all three of you in here to do that?”

Best: The closing video of the UK show ‘Top Gear’ using a vehicle-mounted rocket launcher to take out a Gatso scam cam.

Orlando, Florida is now potentially on the hook for over $4 million in refunds after a judge rules the ticketing scheme to be invalid.

LaserCraft was the initial vendor for Orlando, until American Traffic Solutions purchased the Georgia company in June of this year. ATS has automated ticketing operations throughout Central and South Florida, as well as a vested interest in tolling.

In a rare example of honor among thieves, Redflex has refused to operate cameras in the Sunshine State, calling such operations “illegal.” (Update: No such thing as honor among thieves; Redflex proceeded to bid on contracts in Homestead, FL despite their own securities statement acknowledging such schemes to be illegal.) 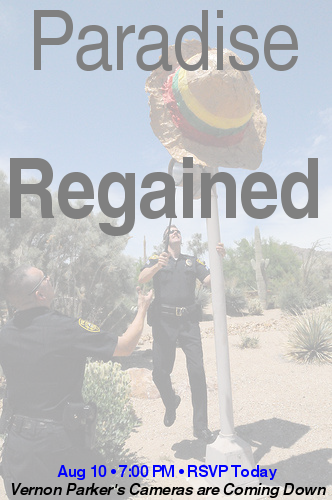 “I thought maybe I ought to send them the money and not worry about it, and that’s the last thing you should do.“

The victim thought upon receipt of the “notice of violation” that the ticket was a scam (and rightfully so) and got the matter resolved only after involving the local media.

Other ATS and Redflex FAILs this week include:

Changes bring DeLand red-light cameras to rolling stop
Officials will have to re-evaluate whether to pursue the use of red-light cameras now that… a new state law would take a big chunk of local ticket revenue.

Firm doubles Palm Coast’s fees
Here’s something to make Palm Coast officials see red: The company that runs its traffic light camera system is asking to more than double what it currently charges the city.

Seeing red over camera contract
A CITIZENS’ revolt against red light cameras in New Orleans has led to claims a Victorian company agreed to pay a share of the fines to a former city councillor if it won a contract.

Red light photo enforcement is no longer active in Yucaipa
“The program was not very productive in terms of paying for itself,” Hemsley said. The city anticipated a revenue of approximately $140,000, but has only collected $27,500. Since it is the court collection system that has resulted in lack of revenue, Hemsley said the Redflex and the city could not find a good solution or alternative to canceling the contract. “After negotiations with Redflex, we agreed to pay the balance due of $198,000 and terminate the agreement.”

Town’s Automated Traffic Enforcement Approaches One Ticket Per Citizen
Tennessee town of 17,000 has issued over 7,300 traffic tickets in half year since adopting system