The revelation? Widespread, illegal certificates of service, admittedly completed by office workers instead of the actual server.

Just got back from court with another Photo Radar case win — but how I won “shocked” even me.

I then asked if he had notes from the day of service, which he confirmed, and I asked if I could see them. I compared his notes to the certificate of service, and saw that some of the demographic specifics were off (the height was 5″ off, the age was specific instead of the range in the notes, the weight was off by 5 lbs.).

I then asked him about the differences (in that, more than anything else, the height seemed significant).

He answered that he sends his notes in to the process service office, and then someone there fills out the certificate of service with all the details, and adds a digitized image of his signature, and the files it.

My jaw hit the desk. I asked him to confirm that the certificate was completed from his notes, and that he did not review it before it was signed, under penalty of perjury, with his digitized signature, and he confirmed, and said that’s the way they always do it, in 10’s of thousands of cases.

I argued to the judge that I had no issue with the digitized signature, but that the certificate of service was void, as it was completed and signed without his review, and it did not accurately reflect his own notes regarding the service.

The judge questioned the process server some more about this process, and, among other things, he admitted, that, well yes, for eviction service, that’s not how they do it, but for photo radar they do.

UPDATE: The FBI is the agency assigned to investigate public and judicial fraud. Their contact information is as follows. We encourage any reader who feels they may be a victim of false service to immediately file a report.

A lobbyist front group for scamera peddler American Traffic Solutions has been dealt a severe blow in Washington State over the firm’s attempts to stop a public vote on dangerous automated ticketing machines:

In a two-sentence order, the court refused to intervene in the scheduled November 2 election in the city of Mukilteo where residents had signed a petition forcing a red light camera and speed camera ban onto the ballot. The denial of a motion for an emergency injunction came a month after the Snohomish County Superior Court also declined to stand between the voters and the ballot box…”

Growing frustration over the intrusion of automated ticketing machines is showing up more often in the arena of entertainment.

A big-screen remake of 1930s superhero “The Green Hornet” is set for release in January of 2011, and the producers of the film are using the violent destruction of a “red light camera” as the ending action sequence (video) in a 2 minute 30 second trailer available on YouTube.

The “superheros” find themselves snapped by what appears to be a Hollywood adaption of the infamous “Redflex scamera head.”

Response to the “cash flash” is swift, as a missile is launched from the vehicle which subsequently dispatches the scamera to a fiery, explosive demise.

The highly-rated BBC program “Top Gear” recently used a similar, real-life sequence to terminate the existence of a Gatso lookalike.

The tables were turned in the 2008 action-thriller “Eagle Eye,” in which a rogue central computer named “ARIAA” used red light cameras and license plate recognition to locate and scramble missiles against a driver and passenger who were attempting to shut the system down.

Actual removal of the ticketing devices around Arizona is proving to be much less entertaining. Observers report that the Redflex – DPS cameras on the US-60 have started to come down, with cameras in the highway median being removed first.

Redflex’s piezo in-ground sensors will remain in place, becoming the property of Arizona Department of Transportation. They will likely remain unused as ADOT has their own network of sensors to anonymously monitor freeway traffic speeds.

According to AZCentral, “[Geoffrey] Jacobs wrote a fake obituary regarding another ex-girlfriend and sent it to Hawaiian Airlines, along with a letter detailing how Jacobs was trying to cope with the “huge loss” of his fiancee. The letter was sent so Jacobs could transfer his ex-girlfriend’s ticket to another woman…”

If this officer was corrupt enough to forge documents for an airline ticket change, did any of the members of the public stand a chance when their citations were in his hands?

But wait, there’s more… This one’s for the “if you’re not doing anything wrong, you have nothing to worry about” crowd:

He also was found to have abused DPS resources when he flew a state-owned plane over the neighborhood where he believed an ex-girlfriend lived in an attempt to locate her new home.

And who better to help run the accident-increasing photo enforcement scheme than an officer who had great first-hand experience causing accidents:

Jacobs joined DPS in late 2002. Less than one year later, he was served with his first letter of reprimand for an October 2003 wreck in Tucson. The next year, Jacobs was in another wreck and lost eight hours of vacation pay.

Jacobs, according to the New Times, “was the trooper who arrested Republican Party Executive Director Brett Mecum in May 2009 for criminal speeding. “
Now Jacobs is redefining irony, by suing the state over his dismissal. His claim? “…Defamation and violation of privacy and constitutional rights. “
Perhaps one would be more compassionate for the troubled cop if he didn’t work in a police unit that defamed and violated privacy and constitutional rights on an automated level.
With forgery, stalker-like surveillance, and dangerous driving supposedly under his belt, he would fit in well with the corporate criminal culture at Redflex Group.
(Should a full investigation into this officer’s role in the photo enforcement unit be conducted by AZDPS? Sound off in the comments section)

What do you do when your industry approaches market saturation and increased public opposition?

This is the question the peddlers of automated ticketing will have to start asking themselves in the immediate future if they hope to survive in any form whatsoever.

Almost all large United States cities have been approached by either Redflex or American Traffic Solutions pitching the tired, debunked claims of improved traffic safety.

Unfortunately for these companies, voters and drivers have awakened to the scheme and are opposing new and existing systems worldwide over a variety of reasons, from civil liberties concerns to the proper role of government.

Smaller and smaller communities are being being swindled into signing contracts with these corporations, resulting in millions of dollars being extracted from local economies and sent directly to the profiteering vendors.

The blowback to such installations has ranged from expected opposition to cold-blooded murder. Last week, the confessed shooter of a Redflex photo radar van driver in Arizona was sentenced to 22 years in prison.

Unclear is the liability the State of Arizona will face for their “romp in the bed” with corporatism in the form of photo enforcement. Redflex was contractually obligated to provide “public service announcements” to explain automated ticketing to the public when the statewide ticketing contract was signed with the Department of Public Safety.

DPS is now being sued by the surviving family, and rightfully so. It doesn’t take an overpaid government beancounter to figure out that placing an unarmed civilian in a vehicle falsely marked as law enforcement is a bad idea.

With an onslaught of bad publicity, automated ticketing vendors may remember 2010 as the year their business model went sour. Lawsuits demanding refunds plague Redflex in Minnesota to the tune of millions of dollars while increased legal challenges in Florida and California threaten the very existence of red light cameras and so-called speed enforcement.

The Cameras are Coming Down… but in the end it may be due to the fatally flawed business model based on greed and inconclusive results that ATS and Redflex have depended on for over a decade. 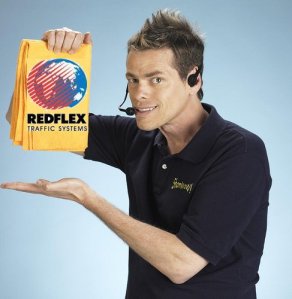 Hi, Vince here from Redflex! Get ready to "snapshot" your way out of wreckless, drunken government spending with our new ScamWow! It's so easy!

Lobbyists who visit local city councils for Redflex are compensated on a commission-based scheme, and in one instance the cash was promised to be split with the wife of a local judge:

Redflex Holdings allegedly agreed to pay 3.2 per cent of its share of camera revenue to the former United States councillor, who subsequently arranged to split the cash with the wife of a local judge.

Okay, camera apologi$t$: tell u$ again how it’$ not all about the money?

It’s hard to find a mainstream media piece as perfect as this one. Enjoy the video and post your comments below.

Good: The lovely Tracy Grimshaw of A Current Affair asks the question of automated ticketing: “Life savers or just revenue raising cash cows?” CameraFRAUD as well as FireRedflex.com are mentioned in the story.

Quotes from the video: “Governments all around the world are in a lot of debt, they have to raise more money, and what better place to raise money than from penalties and speeding fines.”

“The cars are unmarked and there’s no warning sign until after you’ve driven past, and even then it’s tiny.”

REPORTER: “What do you do to pass the time when you’re sitting in here?”

REDFLEX DRIVER: “We watch the instrument.”

REPORTER: “And you need all three of you in here to do that?”

Best: The closing video of the UK show ‘Top Gear’ using a vehicle-mounted rocket launcher to take out a Gatso scam cam.