The Cameras Are Coming Down in Mesa

News last week out of Mesa via WarOnDriving.com

Another Arizona city is taking down their unpopular automated ticketing camera system.

This time it’s the Phoenix suburb of Mesa, which has a population of more than 400,000 residents. American Traffic Solutions has been issuing scamera tickets in Mesa intersections and via mobile devices since 2006. Their driver-distracting cameras and illegally parked radar vans are no longer welcome in the city after the Public Safety Committee voted to not renew the contract.

In 2011, a similar LAPD panel in Los Angeles voted to kick American Traffic Solutions out of that city as well. The main reasons given by the panel were that accidents had increased and most people who were sent the wallet-busting $500 citations by ATS simply ignored them.

It’s no surprise that Mesa would follow suit, given the public outcry about confusing intersection lines and the loss of due process. On the panel’s recommendation, the cameras will be torn out in 2014.

Mesa can look forward to their intersections being free from a private company with a profit motive spying on every motorist passing through.

Last summer residents spoke out on local news about the chaotic situation and uneven law enforcement for drivers:

No words from the ATS sockpuppets yet about their ouster. But it’s easy to assume their legal team and internet shills are going to  play their typical games with the media.

“Ban the Scameras” is Back! Let’s Get Moving on this Arizona

Arizona Senators are almost begging to hear from you on this matter. They’re ready to pass this bill, so let’s make sure they know how excited we are that they’re ready to listen and act.

SCR-1029 would put an all-out photo ticketing ban on the ballot in November of this year. Contact your AZ Senators today [list].

The Arizona Senate Judiciary Committee met yesterday and the main item discussed was SCR 1029, which would give the citizens of Arizona that elusive vote they’ve been screaming from the rooftops for years to get.
The Committee passed the measure by a 4-1 vote and sent it to the Senate floor, where it should be voted on. Although, that’s not a done deal.By 2008, the majority of AZ motorists had grown tired of being treated like lab rats, by then Spy-in-Chief (and Governor) Janet “Big Sis” Napolitano and her Redflex-sponsored peep show aka the freeway speed cameras.

After setting up this unprecedented violation of every sacred right that motorists have been guaranteed by the US and Arizona Constitutions, turning the freeway system into a cluster… disaster area, she blew out of town to become head of DHS, where she now is able to scan and grope just about anyone passing through an airport without any reasonable suspicion.

It’s clear that motorists and travelers don’t enjoy having their liberties violated for the profit of private and sometimes foreign (Redflex) contractors while complicit government agencies make up stories about safety being their concern.

It doesn’t take a traffic engineer to figure out that adding more distractions in the form of flashing camera boxes and tinkering with signal timing to make sure “violations” remain in the profitable range, actually makes intersections more dangerous.

But, just in case one needed the latest result of independent, university study, here’s USF blasting camera systems to bits as the dangerous boondoggle they are. [link]

Getting back to the situation unfolding in AZ, this is no done deal. In 2011, the same SCR (Senate Resolution) passed with a 20-10 vote and then was sat on by the rapidly expanding posterior of then Speaker of the House, Kirk Adams (RINO) who is now running for U.S. Congress.

The resolution died an unceremonious death, but with Adams out of the way, there is new hope for Arizona.

Taking it one step at a time, however, SCR 1029 need to have that floor vote, which is a great bet to pass. Then House members like Michelle Ugenti (R), who is very much in favor of the citizens vote to ban camera systems will be heavily urged to push this measure to a house floor vote as well.

That’s an oversimplification of the legislative process to be sure, but the conclusion for today is that SCR 1029 is off to a good start.

Arizonans, let’s make sure that floor vote happens in the Senate at rapid-fire pace.

Below is a document with contact info that can also be found at the AZ Senate website.

Let those elected officials know just how excited AZ is to kick Redflex and ATS off your streets and intersections for good!

Syracuse Says No to Redflex, ATS

More and more cities are now using caution before wantonly installing red light cameras, which have proven over decades to have no safety benefit.

Sure, all the money from Redflex and American Traffic Solutions (ATS) lobbyists is still appealing, but they tend not to donate to those who’ve lost their jobs after thwarting public will.

Syracuse, NY is the latest to take a wise step back and examine the situation before dotting their public roads with Big Brother.

The city had been listening to bid from multiple vendors, which included both Redflex and ATS.

Mayor of Syracuse Stephanie Minor’s chief of staff Bill Ryan was quoted as saying, “As other cities are running away from this, why would we run into it?”

Arizona cities are dropping their so-called “photo enforcement” traffic cameras in a flurry in 2011.

The latest is Peoria, where camera intersections such as 83rd Ave and Thunderbird (above picture) saw tremendous increases in accidents. City officials are now claiming that overall there was a 29% increase over the three year life span of the program, but much larger increases (300-500%) were recorded initially.

“What Happens?” + a CF announcement

What happens when their police departments illegally arrest activists – repeatedly – for daring to speak out against rampant surveillance and inappropriate corporate control over entire municipalities?

What happens when entire state governments are unable or unwilling to listen to the will of the people regarding foreign corporations who base their revenue expectations on mail fraud and phony tickets?

What happens when government considers mere movement a privilege instead of an inherent right?

They get painfully exposed by CameraFRAUD.

as we begin beta testing

The big one is coming. Los Angeles City Council will overwhelmingly vote to end the red light camera program…. this week!

The formalities are mind-numbing, but they’re going to come quickly this week after the inevitable was delayed by some lame-brained scheming courtesy of American Traffic Solutions CEO Jim Tuton.

And the other shoe drops. Annise Parker could have used an escape clause to get Houston out of its contract with ATS, following last November’s vote to ban red light cameras.

There’s nowhere else to hide for Mayor Parker who has clearly chosen the interests of American Traffic Solutions over her own city.

There is an extremely cozy relationship between American Traffic Solutions and the city of Houston, Texas. So cozy, in fact, that the mayor of the nation’s fourth largest city has no problem lying to the people she allegedly serves just to protect red light cameras.

Parker said after the election that the cameras were being shut off and wouldn’t come back on, as it was the will of the people. Well, here’s a shocker – that was a complete lie and it looks like it will cost her a chance to be re-elected, as Houstonians are now furious with Parker.

As a matter of fact, the red light scameras in Houston never really were shut off at all. American Traffic Solutions is pushing more bogus stats claiming that “more drivers are now running red lights” after tickets stopped being issued following the November election. Their stats make absolutely no sense when considering that accidents are down 16% since the flashing driver distractions were put on “stealth mode.”

How does it feel to know that ATS has been watching you and collecting data even though you voted them and their automated ticketing machines out of your city, Houston?

The collusion between ATS and the city of Houston, who clearly wanted to lose their court case is evident in the fact that they pushed for corrupt federal judge Lynn Hughes to hear the initial case. Paul Kubosh, who led the initiative to put the red light scamboxes on the ballot was quoted in the Houston Chronicle yesterday:

Wednesday’s announcement provoked the full fury of Paul Kubosh, a lawyer who helped lead the petition drive to get the cameras banned. When reached for comment, he did not even wait for a question. “Start typing!” he said, and launched into criticizing the decision.

“The mayor is going to ask for your vote in November. How can you possibly give her your vote when she does not respect yours?” Kubosh said. “She is not following the will of the citizens of Houston, she is following her own conscience.”

Kubosh repeated that the city shopped the suit in federal court in hopes of an unfavorable ruling that would compel it to turn the cameras back on.

The contract with ATS runs through 2014. Before that contract is extended, Parker said Wednesday, she intends to ask City Council to place another referendum on the ballot asking voters whether the program should continue.

“Anything she says about placating the voters is a lie. You can’t believe a word coming out of her mouth when it comes to red-light cameras,” Kubosh said. “She’s just saying that to appease the voters to try to calm them down a little bit. If she had an opponent the cameras would still be down.”

Annise Parker cannot be trusted and Houston will be rid of her in a few short months. As for British Petroleum owned Judge Hughes and his chicanery.. well his position should have been on the chopping block a long time ago.

Has American Traffic Solutions sunk to a new low? 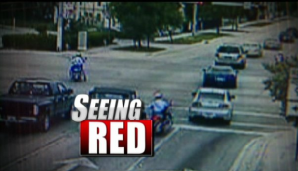 Thanks to WSVN Miami-Ft Lauderdale for the story

That might not be possible, but another lie they frequently tell the public has been exposed.

“Every ticket is reviewed by an officer,” ATS execs and PR folk are constantly parroting. It’s hard to believe that’s the case given the volume of the fraud letters masquerading as traffic tickets they send out.

Do you remember when you wondered why math was important in school? As it turns out, without the most basic math skills, you might end up working for companies like Redflex or American Traffic Solutions.

Earlier this week, we saw how terrible Redflex is at calculating the worth of their company, but what about American Traffic Solutions?

News from Texas and Missouri this week proves that they may be greatly hindered in basic calculations.