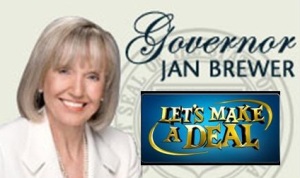 In talks with legislators in the AZ House, the reality has set in that the red light and photo radar scameras are not going anywhere until at least 2012. Speaker Kirk Adams has been pounded with phone calls and emails, but won’t budge on this issue.

There is however, some really good news to report. Governor Jan Brewer’s office has offered an olive branch to CameraFRAUD supporters. They have agreed to create a “citizens exempt from photo tickets” list for the rest of 2011.

Governor Brewer has said in the past that she does not like the photo ticketing system and wants to see a citizens vote on the matter.

Currently, only politicians, judges and Redflex and ATS employees are exempt from photo tickets, so this will be a special Arizona residents list which will be filed with courts and the Motor Vehicles Department. Redflex and ATS would still issue tickets to alleged “violators,” but if they’re on the list, they may ignore the tickets, which will be dismissed automatically by the courts, without being assigned to process servers.

There is a deadline of 5 p.m. on Friday to get on this list and there is a short form that must be filled out, which can be obtained from the governor’s office.

Governor Brewer’s Chief of Staff, Eileen Klein has requested that those who wish to be put on the list fill out the contact form here.

Please put “CameraFRAUD.com” in the topic field and just include a brief request to be sent the form for the “exempt from photo tickets” list.

Requests received after 5 pm Arizona time tomorrow will not be honored.

This entry was posted on Thursday, March 31st, 2011 at 11:45 am and is filed under News. You can follow any responses to this entry through the RSS 2.0 feed. You can leave a response, or trackback from your own site.