A giant sombrero placed over a Redflex ticketing machine in Paradise Valley, Arizona was stomped on and destroyed by town police officers before being placed in the back seat of a cruiser.

CameraFRAUD volunteers had gathered at the “scamera” location in the upscale Phoenix suburb late last month to assist a production crew from Comedy Central’s “The Daily Show” in obtaining footage and interviews regarding two controversial Arizona policies: photo enforcement and SB1070.

According to witnesses, PV Ofc. Steven Chavira arrived on the scene and immediately demanded the production crew cease filming, using his hands and body in an attempt to obstruct the crew’s cameras, apparently unaware of the irony of his actions.

According to TheNewspaper.com, “Chavira… then jumped several times in vain attempts to reach the giant hat that rested on the camera head just beyond his reach. After using a stick, Chavira and a second officer were able to knock off the sombrero, which he stomped on several times before taking it into custody in his patrol car.” 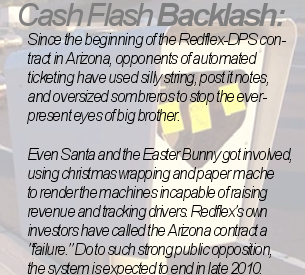 Did the officers act inappropriately? While covering or blocking a ticketing camera isn’t known to violate any local or state law, the officers actions appear to be unprofessional: the immigration debate is a hot topic; sworn law officers stomping on something racially symbolic is a public relations fiasco in the making.

Furthermore, destruction of evidence is a serious crime, and would be applicable if the town had decided to attempt to maliciously pursue the individuals responsible for the placement of the sombrero.

This entry was posted on Saturday, July 10th, 2010 at 7:32 pm and is filed under News. You can follow any responses to this entry through the RSS 2.0 feed. You can leave a response, or trackback from your own site.