This time it wasn’t us who gave the scamera operator it’s newest nickname. No, it was the suddenly very quotable State Senator Frank Antenori. His words, when asked about a basically worthless piece of legislation were “The Redflex Mafia got it” and “That would have been a significant hit to their bottom line.” Those remarks were seen yesterday in the Yuma Sun online. 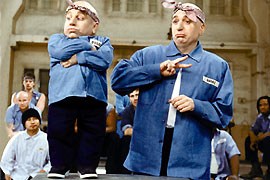 Antenori had hoped for the original measures in the bill to pass, but the struggling Redflex Traffic Systems lobbyists pared it down to a law that we already have. Antenori’s version would give a one second grace period before Red Light Cameras would flash still images of motorists in the intersection when the signal has turned red. This buffer would have lessened the anxiety level for many drivers entering from the “dilemma zone,” where Redflex Surveillance cameras are in place.

Once those measures were scrapped, the law that was eventually signed provides that all intersections in the state must have at least 3 second long yellow lights, which was already law. One has to wonder what the point of signing the bill actually was.

SB 1018, which EXPANDS photo radar and what it can be used for in Arizona is still unsigned by the Governor, so there is more time to let her office know how we feel.

This entry was posted on Tuesday, May 4th, 2010 at 7:38 pm and is filed under News. You can follow any responses to this entry through the RSS 2.0 feed. You can leave a response, or trackback from your own site.

5 Responses to “The Redflex Mafia”