Arizona motorists should be hopping mad. Kangaroo Court justice has always been supported by both Redflex and ATS, but that’s not the real story here. 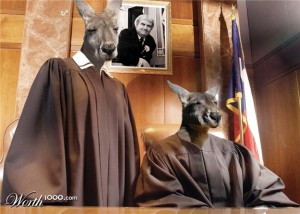 In what looks to be a major scandal brewing, former Paradise Valley Police Chief John Wintersteen has denied to the Associated Press that he was paid by Redflex and Scottsdale’s ATS to file a petition on their behalf. The petition, which shows Wintersteen as the filer, would change Arizona law to subvert due process in favor of the scamera companies. It would eliminate the service of process requirement for photo radar and red light camera tickets. In other words, Arizona motorists wouldn’t have to be served scamera tickets in person to make them valid legally. The petition was filed with the Arizona Supreme Court by the law firm Quarles and Brady.

But of course, Wintersteen just did this out of the goodness of his heart because his love of public safety compelled him to. Right. If he felt so strongly about it, why did he only think of the idea after being presented with the petition by Redflex and ATS officials at the Scamera Summit luncheon described in the AP article? This could get ugly for Wintersteen, Redflex and ATS real quickly.

Something doesn’t add up and the retired Police Chief’s 13 year relationship with both companies is now under the microscope.

Quoted from the AP:

“Wintersteen said he was invited to a lunch with employees of Redflex and its biggest competitor, Scottsdale-based American Traffic Solutions, in late December. He said he mostly talked with them about public education and the photo-enforcement program. He said he has long been friends with many people at both companies, whom he met during his 13 years as police chief in Paradise Valley, a wealthy suburb of Phoenix.

At the end of the lunch, Wintersteen said Redflex employee Cristine Weekes handed him the petition, which had blank spaces for the name, address and phone number of the petitioner. “She said, Take a look at this. What do you think?’” Wintersteen said. “I looked at it that evening and in the morning said, Yeah I’d be really interested in doing this.”

The cameras are coming down and now they may be bringing former police chiefs with them.

This entry was posted on Saturday, January 16th, 2010 at 2:20 am and is filed under News. You can follow any responses to this entry through the RSS 2.0 feed. You can leave a response, or trackback from your own site.