Arizona is lucky to have Sheriff Paul. He was elected after promising to fight the spread of the scameras and the newest CameraFRAUD video proves that he is a man of his word. Let’s be honest, it’s very difficult for a publicly elected official to stand up against a system like Photo Traffic Enforcement when it’s a revenue generator for the state or municipality. It’s also difficult to align yourself on one side of a hot button issue, when it would be easier to pass the buck and stay neutral. That’s what makes Sheriff Paul so special. A truly valuable public figure and law enforcement official is supposed to work for the people. He stands up for what’s right when so many bow down in the interest of profit over safety. 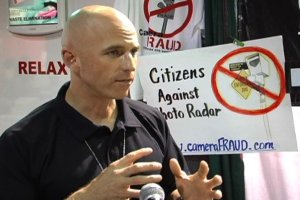 Arizona Citizens Against Photo Radar will be holding a fundraiser dinner with Sheriff Paul on February 18th. Check back for more details as they come. A local business has also offered to donate a percentage of every sale they make to the cause as well. See their ad below.

Thanks to the voters of Pinal County for choosing so wisely. Thanks to Sheriff Paul for supporting our cause.

The Cameras Are Coming Down!

This entry was posted on Thursday, January 14th, 2010 at 10:09 pm and is filed under News. You can follow any responses to this entry through the RSS 2.0 feed. You can leave a response, or trackback from your own site.